Let the projects begin! We are looking forward to some warm, and right now dry, weather to begin the last pieces of our restoration. Tours and open house dates are already going on the calendar and 25251 is looking forward to visitors. We are also looking forward to continuing our cross-country visits to her cousin and sister cabooses. Sadly, most of the are rotting away and do not have very loving homes. New pictures will be added to the photo gallery so check back soon.

The Best Seats In The House

After a loooooong and very quick drive early in the Spring to Fairfield Iowa, we acquired two very sought after pieces for our restoration….two seats to put in the cupola. The original seats were scrapped at some point in her journey and were very hard to find, but are a very important part to the working job of the caboose. Amazingly, after a lot of interesting google searches, we were able to find the rail scrap yard that has some available. After being carefully taken apart and remastered, they are ready to go up as soon as the restoration work is done on the interior of the cupola. What a wonderful view to read, or do homework, or just relax and watch some winter snowfalls! More pictures of the seat restoration process coming soon. 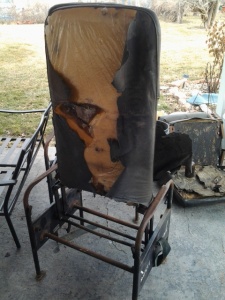 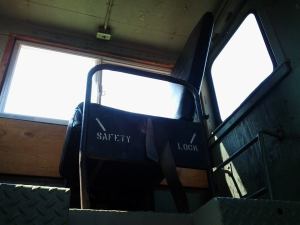 I hope everyone had wonderful and safe Holiday!

All decorated for Independence Day!!

As Spring approaches and the sun shines brighter, we are getting more excited to be able to continue the progress on the caboose restoration. A few small projects were able to be completed during our mild winter, but most of them have been on hold until now!

Throughout the years, almost all of the windows had been busted out or broken. We were able to get new windows installed before most of our winter storms hit, and for the first time in several years, the inside is finally sealed from the elements. Another small touch included fixing and  hauling a very heavy smokestack back on top of the roof and reattaching it.

Even though we would love some snow this Christmas season, we were very glad that the unseasonably warm weather has stayed on for at least a little while. It has allowed us to restore the lettering back onto the sides of the caboose. Even with the gorgeous new paint job, it still looked like something was missing every time we looked at her….

Since we were not able to get official decals from the railroad, we did the best we could with vinyl car lettering.  It was a slow process, one we let the professionals handle, but it was well worth it! The difference was immediately noticeable.

Now that she proudly displays her number once again the rest of the markings can wait until the spring and warmer weather.

Letters and numbers being replaced

Prepping to move the caboose took quite a bit of time and endured several delays.  After sandblasting and getting the painting finished we had to wait for nearly a month while negotiating with the town for approval on bringing 25251 to its new home.  We lost a month of good weather waiting for this but when the town and us finalized our agreement both sides were pretty happy.

Setting up for the move brought us into contact with a professional railcar mover and their crane company.  These people came highly recommended from the salvage yard and we were not steered wrong in the slightest.  Highly trained railcar movers, these two companies were consummate professionals who were dealing with a family of enthusiastic geeks!  Cameras in hand we drove down to the salvage yard one last time to meet the crane crew at 8am. We were more excited than 4 year-olds on Christmas morning!

As the crane crew began their work, the age and condition of the railcar was working against them. The car sat with her wheels sunk in the dirt and leaning to one side for so long that she had no intentions of moving. Rust and years of being immobile had left her wheels partially rusted to the pin and the body did not want to come loose from them. (We thought that 25251 might have been afraid that she was being sent to the scrapheap)  After an hour of work and a good blowtorch she finally came loose and swung freely in the air cradled gently by a large crane.  There is something wrong in watching a railcar fly through the air! Once she was nestled onto her lowboy, the trucks quickly followed.

At this point we took the opportunity to look at the trucks and saw that UP had changed them out in 1977.  The casting clearly delineated this for all to see.  Caboose trucks are different in that they have extra pieces added to them to power the generator held underneath the body of the ‘boose.  Ours are in magnificent condition.

We left at this point to get back to the house and railbed.  A small crowd of friends and family had gathered waiting for the moment.  Watching from down the street we waited and sure enough spotted the caboose as it came over the overpass.  We didn’t know until that morning that they were planning to SHUTDOWN the highway!  The height of 25251 precluded it from going under the traffic lights so…as traffic backed up people would honk their horns until they actually SAW what was coming.  All action ceased as the trailer swung across the highway and then backed into the lot.

The trucks were swung individually over the fence and placed onto the rails.  We were then invited to help with placement and amazingly enough the trucks moved with just a simple light push of one hand.  Measurements were taken for spacing and then the body of 25251 swung over and onto her trucks.  This was THE moment we had waited six months for.  She easily settled onto her trucks and to our great surprise the emergency brakes still functioned. She stood tall and proud upon RAIL for the first time in over five years.  It was a fantastic moment for all of us who had been involved.